On September 4, 2018 Hawk’s View Golf Club hosted its third annual Veterans Appreciation Day. We honored 144 veterans of all of the services, including many who served in World War II, Korea, Viet Nam and the Middle East. Our keynote speaker was Gary George Wetzel, a Medal of Honor recipient, and a second speaker, Mark Finnegan, the co-founder of the organization, VetsRoll. 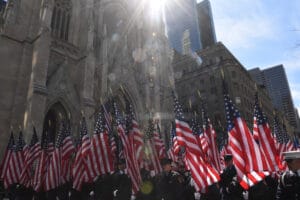 I did not get to speak at length to Gary Wetzel while he was here, and I have never personally spoken to a Medal of Honor recipient in the past. However, it was my feeling that if I did, he would say he did nothing special; nothing heroic; he was just doing his job, and helping his buddies. And that is exactly what he said in his remarks.

If you do a computer search for Gary Wetzel, you will be stunned and brought to tears by the extraordinary courage he showed, and the events in Viet Nam that led up to his receiving the Medal of Honor. I thought he would also say that all of his fellow soldiers and veterans were heroes, and he did. He was absolutely right. They are heroes to me, and to the owners, management and staff at Hawk’s View Golf Club.

A little about VetsRoll. This wonderful organization takes veterans from all the services to Washington, D.C. to visit all the memorials to veterans. The buses carrying the veterans and their companions travel across many states and through many cities, where they are honored all along the way to their final destination, and back again. I’ve been told by a friend who was fortunate enough to go that it is a wonderful experience; police escorts, motorcycle groups, crowds along the way waving flags, people cheering on overpasses as the buses passed. This is something that most of these veterans missed when returning from their service.

For World War II veterans, the war ended and, like my dad, they came home on a bus, or a train, or a boat…picked up their lives, went back to work, got married, and had children, never speaking much about their experiences. For Korea veterans it was pretty much the same. Viet Nam veterans suffered unbelievable cruelty. They were spit on, hit with rotten vegetables, and called horrible names. I hope to some extent we are making up for that shameful time in our history.

In summary, 242 years ago, a group of very brave men came together to start a new nation, where freedom was the order of the day. They were willing to sacrifice everything; their families, their businesses, their homes, and their lives. Out of this group, and this new nation, came our first military.

They were a scruffy bunch of patriots, barely supplied, who took on the much vaunted and great British Army. They won. Because they believed in what they were fighting for, and they won because of their incredible, and always present, American spirit, pride, and resolve. Over the years, our military has evolved from that scruffy bunch of patriots to the elite, volunteer fighting force we have today. Through those many years and many wars that American spirit, pride and resolve has shined its light all over the world.

God bless our wonderful military heroes, and their families, who sacrifice so much for our way of life; and God bless the United States of America.