In 1996, I was a volunteer scorer at the GMO tournament in Milwaukee at Brown Deer golf course. In the same year, at the same tournament, Tiger Woods started his extraordinary professional career. He had to borrow $100 from his instructor, Butch Harmon, to pay the entry fee.  Like most people, I knew who Tiger was; the press had made a pretty big deal about his turning pro, and I knew that he had been a pretty incredible amateur. However, at the time, he was just another golfer to me. I didn’t even watch him during this opening tournament.

That rapidly changed. As the year went on, and I started watching him in tournaments I realized that this is the guy. This is MY guy. This is a guy, and an athlete, who comes along once every thousand years (maybe a slight exaggeration). He makes every golf tournament he’s in exciting, fun, and worth watching. Tiger Woods was becoming the best player to ever play the game before my very eyes! I was watching history! It was Michael Jordanesque!

I was now obsessed.

I bought a Frank the Tiger head cover; watched every single tournament he was in, every single day. If I couldn’t watch him live, I’d set my recorder. If he hadn’t won the tournament, I didn’t watch the recording. I was delirious with every fist pump, and every unbelievable shot (who can ever forget that chip-in for a birdie at the Master’s in 2005). If he missed a cut (which, thankfully, wasn’t often), the tournament was over for me. I cheered (literally) every win, and got depressed at every loss. He was always the best looking player, and the best put together player, in the field. He was my everything in the world of golf. 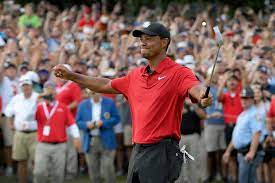 Then the injuries started, and the disastrous fall off the pedestal. The greatest golfer in the world, Tiger Woods, became just another guy.  His wife divorced him for his bad behavior; he fired his friend and long-time caddy, Steve Williams, he was injured, his game went to hell, and he was painful to watch.  Friends of mine, who never liked him, were reveling in his downfall. I felt bad for him and sorry for him.

He had made mistakes and he was no different than anybody else. He wasn’t perfect.  However, He was still my guy. I still watched, even though it made me sad. I didn’t watch a lot of tournaments these past couple of years because the excitement and fun just wasn’t there. There was no Tiger and I couldn’t find anyone else that could take his place. Rory? Not hardly. Not ever.

Tiger Woods is Back

Now it’s 2018 and he’s back!!!! His game is back! He hasn’t remembered yet how to go the full four days, and win, but he’s back, and he WILL remember. Even Jack Nicklaus said he’s playing great and he will remember. My guy is back. I’m glad for him, I’m glad for me (and his thousands of other loyal fans), and I’m glad for golf. I’ll be waiting behind the ropes, Tiger, for that signature huge fist pump when you do win your 80th tournament. I’ll be the one wearing my red Tiger “Make Sundays Great Again” tee shirt, and cheering my head off.