This past weekend was one of the most fun tournaments on the PGA schedule. This past weekend was the match play tournament that pits the top 64 golfers in the world against each other. This year “new” was the order of the day. New date, new venue, new sponsors and most important, new format. This year instead of the usual match play type of brackets, the first “round” is a round robin format where the golfers are split into groups of four, and then two halves.  Each player must play against the other three players in his group and the player with the best record in his group advances to the Round of 16. Now if that’s not confusing enough, there are rules for tie-breakers that would make your eyes cross, so we’re not even going to get into that. Suffice it to say that it all works out in the end.

To make life a little more interesting, two of my co-workers and I decided to each throw in $10.00 each and pick the winners all the way out to the end of the tournament. Very much like the NCAA tournament. When I made my picks, I pretty much stuck with the top golfers in each group. This didn’t set well when it came to Rory McIlroy, because I don’t like Rory McIlroy and find him extremely annoying. However, common sense prevailed and I picked him on the left side to go all the way. On the right side I picked Jordan Spieth to go all the way, and ultimately win the whole thing beating Rory in a blaze of glory and becoming #1 in the world. This, I figured would end the golf announcers calling Rory “World#1RoryMcIlroy” in every sentence. Jordan Spieth didn’t make it out of the round robin, getting beat by Lee Westwood, after blowing a two up lead. 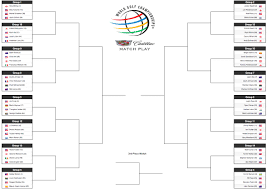 Thanks, Jordan. Now I find YOU the most annoying athlete of all time. Rory, on the other hand, having the heart of a champion, dug deep during his last round robin round and pulled out a win by birdieing the last two holes to square the match, and then winning the match on the 20th hole. My co-workers picked Dustin Johnson (out ) and Jason Day (out); and Martin Kaymer (out) and Justin Rose (out). All good golfers, but I wouldn’t have picked them to go all the way. In their defense, who would’ve picked Tommy Fleetwood? Who is Tommy Fleetwood anyway? He didn’t win the whole thing, but he got a lot further than the top golfers, and who is he? As picking goes, we all picked absolutely terribly.

I have to be honest and say that after the Round Robin, the only players I had left were Rory and Rickie Fowler. After Fowler’s next round, I didn’t even have him. See comment below. One of my co-workers (the asst. golf pro) had NOBODY left and fairly threw $10.00 at me. The head pro was pretty close to being in the same boat, but ended up coming in second. I mentioned their picks above.

For third place (you have to pick that too), two of us picked Rickie Fowler (see above). Let me say this about Rickie Fowler. If you’re a professional golfer, and No. 13 in the world, don’t you think you could get your sponsors to make hats that fit your head? They look even worse now that he got a haircut. But I digress. Rickie is playing really well lately and I thought he may go on to win the whole kit and caboodle. I like Rickie, so it wouldn’t have been the worst thing in the world. Good old Rickie didn’t make it past the Round of 16.

Now, how about the near fisticuffs between Keegan Bradley and Miguel Angel (not in this case) Jiminez? I have never seen that before. Football, yes; baseball, most of the time and hockey, always. But golf?? Keegan whacks the ball into the TV tower, takes a drop, Jiminez complains about the drop, Keegan’s caddie imitates Jiminez’s accent (nice), Jiminiez tells the caddie to shut up, Keegan tells Jiminez not to tell his caddie to shut up, Jiminez tells Keegan to shut up, and a Fowler fan behind the whole thing (dressed in day-glo orange) is beside himself with excitement – or so it appears in an online video. Keep in mind that the match Keegan and Jiminez were playing meant nothing. They were already out of it. This is the only tournament where you have to play a match, even if it means absolutely nada, when you could be on your private jet, winging home and drinking cocktails. The fight continued in the locker room, where Jiminez was defended by Sergio Garcia who also should have been on a plane home.