In this issue of Golf Club Fitting Corner with Jake, I’ll be discussing the fitting process for iron/hybrid sets.

The goal of an iron/hybrid fitting is to achieve solid contact as often as possible, with a desired shot shape (typically the straighter, the better) occurring as often as possible. A sub-goal for a most people is to also increase the distance of their iron shots. Who wouldn’t want to hit a 7-iron into a green instead of a 6-iron or 5-iron? Other sub-goals of an iron fitting include maximizing backspin rates, optimizing launch angle, and maximizing the descent angle of the golf ball as it lands on the green.

The first step in fitting a player for an iron set is to figure out what head style will be best for them. Most manufacturers will have up to four, if not more, iron head style options. These typically include blade, semi-blade, game-improvement, and super game-improvement. In general, better players gravitate to blade or semi-blade, while higher handicappers tend to lean toward a more game-improvement iron. However, this is not set in stone by any means, and there can be some “grey area” for mid-handicappers.

There are several ways to go about determining the best head style for the player, including a quick evaluation of the player’s current clubs, asking the player for their goals with new irons, as well as determining an approximate handicap level of the player. With this info, we can usually deduce the head style down to two, which expedites the fitting process.

Through a process of hitting several balls with the potential shaft and head combinations, we will come up with the most ideal combination for the player. This is where the fun begins – checking for lie angle.

The simplest way to explain lie angle is ‘the angle at which the shaft is connected to the head of the club’. Here’s an image to help clarify: 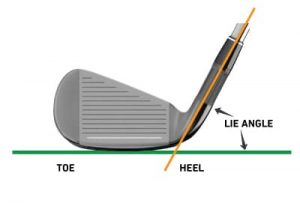 Another important factor of lie angle with the irons is the direction that the ball will tend to travel coming off of the face. Here is another illustration to help explain:

One way to check lie angle is with a lie board, which you may have seen or actually done. This test is executed by putting a piece of tape on the sole (bottom) of the iron, and striking a ball that is sitting atop a plastic board. A mark will be left on the tape that’s on the club, indicating where the sole impacted the board, and therefore determining lie angle. While this test will give you an idea of your lie angle, here is why I DON’T LIKE THIS WAY OF TESTING FOR LIE ANGLE:

The test for lie angle that I do involves using face tape instead of sole tape. With face tape on the club, I will draw a straight line on a golf ball, and position the ball so that line is in a perfect vertical position in line with the intended target. From there, the player simply makes a normal swing on a true lie from the turf (no board needed). The line will leave a mark on the face tape, which will indicate the proper lie angle for that player. 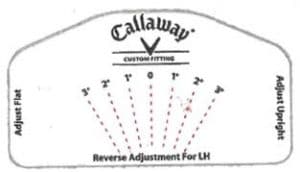 Now that we have head style, shaft, and lie angle determined, we next move into drawing up the set configuration. My first set configuration question for the player will be, “What is the longest iron you are comfortable hitting?” If the answer is a 5-iron, then we will explore introducing a 4-hybrid, and potentially a 3-hybrid as well, depending on how much room is in the bag based on the 14-club limit (the number of wedges and fairway woods will determine this). I always make sure to match up the lie angle of the hybrid(s) with the irons.

And there you have it – a fully custom-fit iron/hybrid set! While this seems like a lot of information to process and get through, my expertise and knowledge will allow us to do a full iron/hybrid fitting in about 30 minutes. It is important to be able to get through a fitting efficiently to avoid player fatigue.

Email Jake to Book Your Fitting

Email Jake to Book Your Fitting